Valentine’s Day is the one day a year where you can show people just how much you care about them. During this time of year there is a significant increase in chocolate sales and sappy, lovey-dovey cards, but there is more to this holiday than rampant consumerism. No matter if you hate or love this holiday, here are five things that you probably didn’t know about Valentine’s Day.

A belief by many single people and couples alike is that Valentine’s Day was invented by one of the most popular greeting card companies, Hallmark. Valentine’s Day was first celebrated in 1537, long before Hallmark was established. This holiday marks the remembrance of various Christian saints called Valentinus or Valentine. The most prominent Saint Valentine lived during the time of the ancient Roman Empire when soldiers were forced to remain single during times of war. These men were supposed to focus more on fighting than on finding a wife. Bishop Valentine went against the emperor’s wishes and performed wedding ceremonies for the soldiers and their loves. Unfortunately, the good Bishop was imprisoned and executed for his so-called crimes.

Where Did Cupid Actually Come From?

Cupid is more than just a fat baby stuffed into a diaper and flying around shooting his love arrows at unsuspecting couples. Cupid actually holds a place in Greek mythology. He is the love child of the goddess of love, Venus, and the messenger of the gods, Mercury. While he is most often depicted in his diaper form, you can sometimes find pictures of him in battle armor, which symbolizes the invincibility of love.

Wearing Your Heart on Your Sleeve

Today, it is a common practice to post all declarations of love on your significant other’s Facebook page, but it hasn’t always been like that. During the Middle Ages, people would pin paper hearts on their sleeves. The paper hearts would have the name of their lovers on them, and the hearts would be worn for a week. This is where the old saying “Wearing your heart on your sleeve” comes from!

Modern-day lovesick women and men turn to delicious chocolate goodies to soothe their pain. Well, if you were suffering from unrequited love in the 1800s, doctors would have prescribed chocolate as a cure to ease the pain in your heart. No wonder chocolate is such a big part of this holiday! And if the packaging of your chocolate just does not feel right, how about Thai silk covered gift boxes from PRESTIGE CREATIONS

Back in olden times, there were many unusual ways to find that special someone or at least predict who you will end up with. If you were a woman in medieval times, you would spend the entire night eating a wide array of strange foods to dream of the man you would end up with. In addition to eating weird foods, bird watching was a popular way to find your significant other. Myth has it that if you saw a sparrow you would marry a poor man but be happy. If you see a robin, you will marry a sailor, and if you spot a goldfinch you will marry a rich man.

A BLOG THAT INSPIRES, CONNECTS & CAPTIVATES YOU 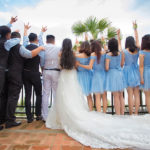 We are glad you came to visit our wedding & event planning blog. Find post in relation or about luxury wedding invitations, event planning, fashion trends and eco packaging bags. We feature high quality original content written by authors all over the world helping you to gain the most out of your wedding & corporate event. Tips, tricks and inspiration just for you!